Tollways
With its enviable location at the crossroads of 2 major interstates, Lisle enjoys convenient access to the entire Chicago-area expressway system and beyond. 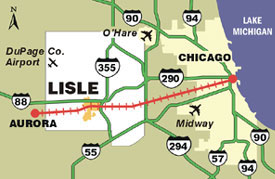 The I-355 North-South Tollway is located on Lisle's Eastern boundary and has both entrance / exit ramps at both Ogden Avenue and Maple Avenue.

Both tollways connect with other roadways, creating a convenient transportation network.

U.S. Highway 34 (Ogden Avenue) is a major commercial corridor that stretches across the nation. The Lisle Ogden Avenue Corridor is approximately 3-miles long.